Seeing as I wrote about the Mego Wonder Woman doll last week, I thought I’d look at the Mattel doll this week.  As I said, I’m not a huge Wonder Woman fan, but when I came across the Justice League Wonder Woman and Mera dolls quite cheap at a doll sale, I couldn’t resist them as they have lovely faces and articulated bodies.  The Wonder Woman doll has quite a good likeness to actress Gal Gadot, and the outfit looks pretty spot on and comes with the character’s sword and shield too.  I’ve only recently seen the Justice League movie and I’m surprised that the Mera doll was produced at all, as the character only had a blink-and-you’ll-miss-it presence in the film.  I didn’t really get a good look at the actress, Amber Heard, or her outfit, so I’ve had to resort to online pictures to decide if it’s a good likeness or not.  And my verdict is not.  While the outfit is a good reproduction, to me the doll doesn’t quite look like the actress, but she’s a gorgeous doll nonetheless. 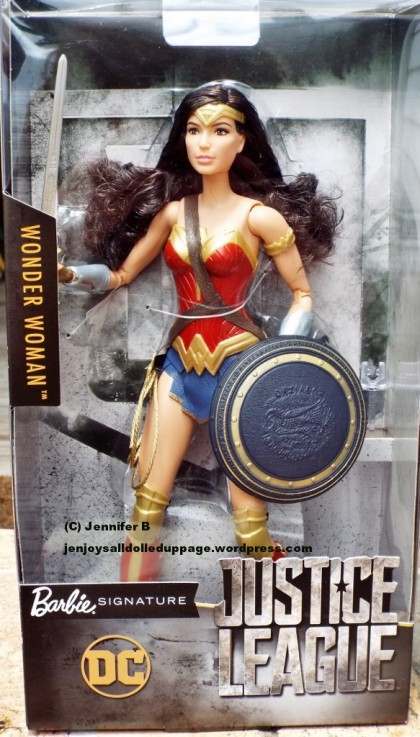 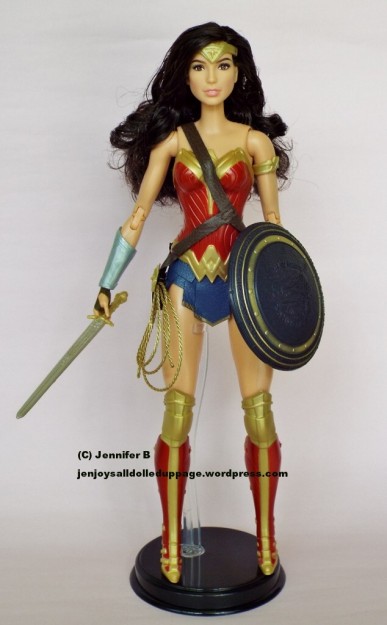 I bought these dolls to redress, not to display as their characters, and this presented a couple of challenges.  Firstly, each outfit consisted of moulded plastic pieces that were glued or bonded in place on the dolls.  A very sharp craft knife, plenty of patience and quite a bit of swearing was needed to remove them without damaging the outfit or the dolls.  Even though I was really careful, there are some marks on the dolls because of the way the pieces were bonded.  It’s not terribly noticeable though.  The second problem: both dolls had painted hands.  Wonder Woman’s weren’t too bad, just a couple of painted brown straps across each hand, but half of each of Mera’s hands were painted green.  A couple of hours, some acetone and box of cotton buds and the paint was mostly gone. There are a couple of remnants if you look really closely.  I may remove the hands and soak them in acetone at some point, but for now I can live with them.  It also looks like the pegs attaching Wonder Woman’s hands are brown rather than flesh coloured, so she has a couple of brown dots near her wrists. I think of them as freckles or age spots.

Mera and Wonder Woman bodies compared to a Made to Move body. Wonder Woman has very muscular arms without the upper arm twist joint.  There are some marks to the torso from the bonded plastic outfit. 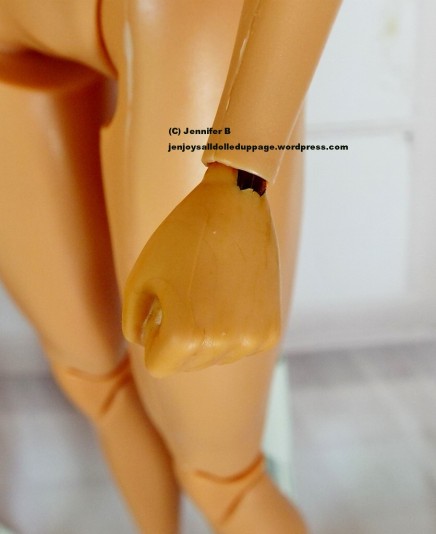 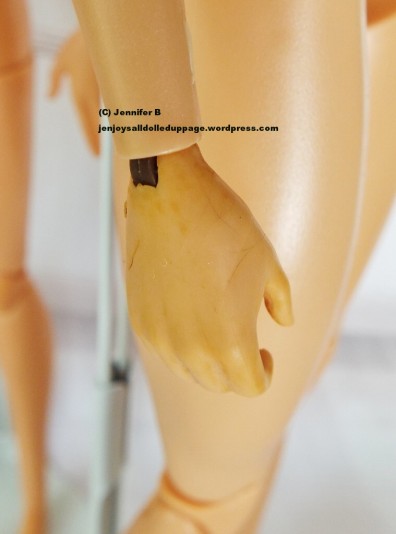 Wonder Woman has one fist and one hand designed to hold her sword. The pegs attaching her hands, unfortunately, are brown, so I’m calling them freckles.

Each doll has an unusual body.  I was expecting Made to Move bodies, but both are strange hybrids.  Both have a torso that I haven’t come across before, and Wonder Woman has very muscular arms with Made to Move-type elbow joints.  However, she lacks the twisting, upper arm joint of the Made to Move bodies, seriously limiting her movement.  Without that twisting joint, there’s no way the doll can hold the sword or shield across her body, so action poses are out.  The doll has one hand shaped to be able to hold the sword, and one in a fist.  Not ideal, once the doll is redressed, so at some point I may replace them, but for now I’m working with it.  Her legs are also unique, both her thighs and calves are bigger and more muscular than other dolls, which to me, is a little strange as I don’t remember Gal Gadot having a particularly muscular build in the movies.  Again she has Made to Move joints at the knee, but lacks the twisting upper thigh joint and ankle joint.  Her feet are shaped more like a Pivotal or Model Muse (Barbie Basic) foot, which I really like.  Mera has Made to Move arms, but strangely, old articulated Fashionista hands.  Her legs are similar to articulated Fashionista legs, but with Made to Move-type knees and the same type of foot shape as Wonder Woman. These bodies presents a few challenges when redressing, some pants may be a little tight over Wonder Woman’s thighs, and some play-line shoes don’t fit these feet.  But it’s worth the effort, they both look great in the right fashion.  I’m yet to have a really good play with fashions – I think Mera would be great in something green, but for now they’re in something I can live with.  While both these dolls have different, celebrity face sculpts, I can see similarities and I’m getting sister vibes from them. And while they’re not quite as poseable as some other dolls, they’re a great addition to displays and dioramas. 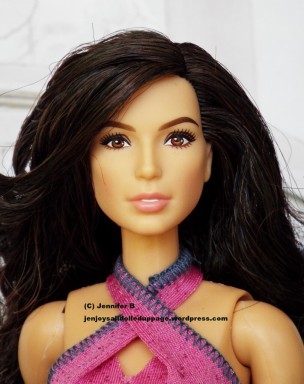 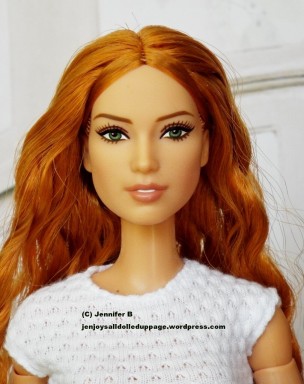 Mattel, and others have made a gajillion dolly versions of Wonder Woman over the years, and most can be found here.

(C) Jennifer B – All content is subject to copyright and may not be re-published or reproduced without written permission.

All content is copyright and should not be copied or used without written permission.